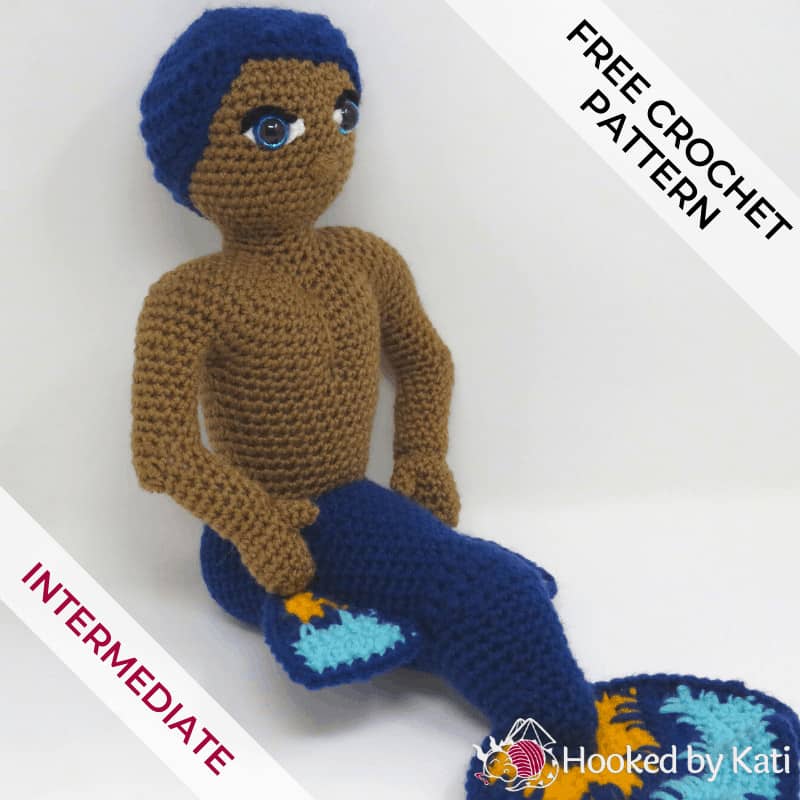 An amigurumi betta merman doll is the perfect complement to a koi mermaid. Fish-tails add a unique twist to the popular crochet plushy pattern.

I decided a merman was just the thing the 2021 Mythical Creatures collection needed. Plus, Grace needed a pal to go swimming with. Her dragon roommates aren’t big into swimming. (Wet wings…you know how it goes.)

I LOVE Betta Fish. I have had several over the years. Recently, I found a Paradise Betta in a store and fell in love with the color combination. Brilliant blue with bold yellow inspired me to make another mer-person, but this time, a dude. A flashy dude, like a betta fish. 🙂

I also have a small betta fish pattern who would be a great companion to Carter.

The Betta Merman pattern is a top down head and body with arms that branch off the body.

His tail is separate so he can sit on a shelf with his fins trailing over the edge. And his wavy tail fins are striped using spike stitches, one of my favorite ways to add a little texture and interest to stripes.

The spikes as well as the short rounds have photo walkthroughs in the Premium Pattern that make this pattern much faster and easier than figuring it out on your own. You’ll really love this one. It’s very fun to put together and makes an awesome doll.

You can purchase Carter’s pattern here, by itself, or you can get both Carter & Grace together.

Why not get the together! Premium Patterns for the Koi Mermaid and Betta Merman are bundled here. Make them both for the perfect pair of fish-themed mer-friends. 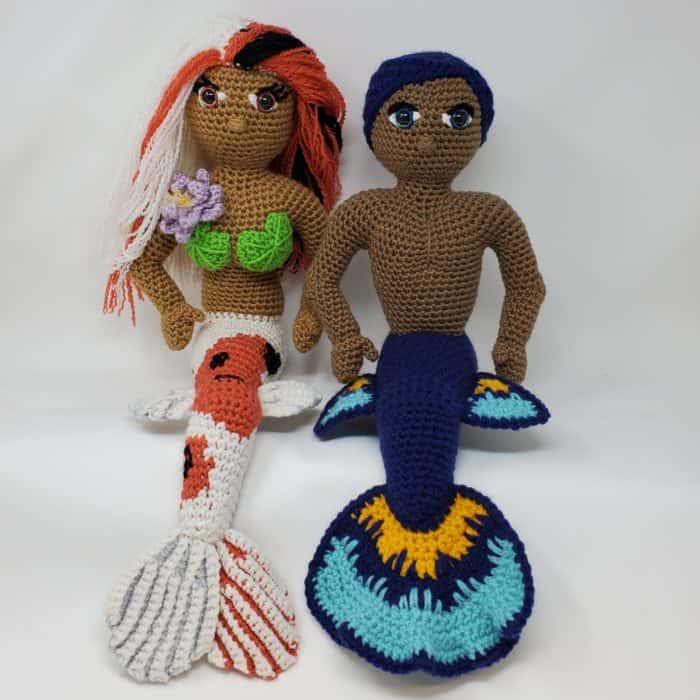 The Premium Pattern Collection includes Carter the Betta Merman & Grace the Koi mermaid. They are printable, ad-free, professionally formatted, professionally tech edited patterns, with TONS of extra guide photos not included in the free version and a chart for the tapestry colorwork in the koi tail.

Do not break yarn. Complete eyes, nose, and neck reinforcement before continuing Body.

Marked st is center front of body. Using marked st as reference to center, work eyes and nose as instructed.

With long strand of WHT, using these four pins as a guide to sew a diamond around each center pin. Repeat so that diamonds are 2 strands thick.

With strand of BLK, sew line from outside corner of eye to top point of WHT diamond, and from top point to st behind/under the inside corner of the eye. Repeat over same sts to make eyebrows 2 strands thick.

Count down 2 rnds from bottom edge of eyes. Sew horizonal line 3 sts long, centered between the eyes. Repeat sewing over this line 6-8 times until the nose looks right to you.

Insert safety eyes through the marked center points of the diamonds. Attach washers.

Pick up yarn from Rnd 34 and continue working on body.

Stuff. Make sure to stuff shoulders and chest full.

Thread yarn back out the back of the body through the starting point. Pull ends until chest puckers slightly. Knot ends together. Hide the knot by threading the tails back through the same hole as the knot and out the bottom of the piece. Cut off excess tails.

Repeat on other arm hole.

Using the starting tails from the sc joins, close the gaps between parts with an ‘X.’

On narrow end of tail, with short rounds (bend) facing up, place a pin at the center st of the last round of the tail. Place pins 6 sts on either side in a straight line up either side of the tail.

Using pins as a guide, sewing along 12 sts on the starting ch (the curved yellow section of the Tail Fin), sew Tail Fin to Tail. (see Pattern Notes)

Using pins, mark a line 12 sts long down the side of the tail from Rnd 16-29. The bottom of the side fins will touch the widest point of the first short round.

Using these pins as a guide, sew Side Fins to Tail, RS facing up. (see Pattern Notes)

Using pins as a guide, sew the body to the top of the tail, facing toward the narrow end of the tail. Finish stuffing body firmly before completing attachment.

Place on head with the inward point of hair “swoop” over the left eye.  Pin in place.

Attach Hair Cap by sewing through BLO of hair. Be sure to stretch hair tightly on head.

You may sell products made by this pattern, but please link back to hookedbykati.com or credit Hooked by Kati on the craft fair tag. Do not copy this pattern for distribution or sale; that’s not nice and also illegal. 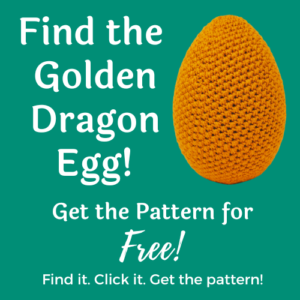