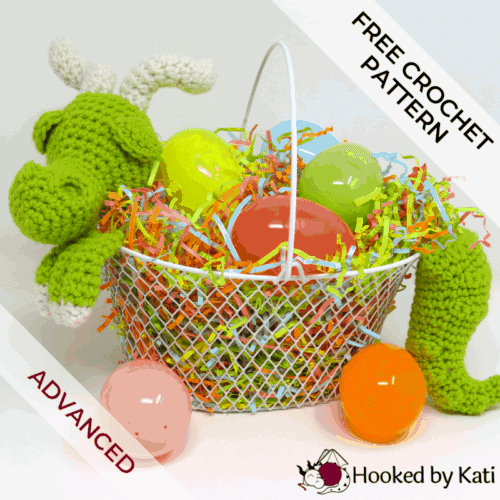 This crochet basket pattern uses amigurumi to upcycle a dollar store basket into an adorable easter basket with a plushy attached.

Easter baskets with stuffed toys attached are always a hit with my kids. They add some funk to their basket and make the egg hunt that much more fun.

A matching set of these fellows will be waiting for my boys on Easter morning. Then I plan to fill the basket with moss and some fake flowers to remain a centerpiece on my coffee table all Spring.

The Basket Dragon is done with many of the same techniques as Vincent the Dragon. His claws are worked individually and then attached on the last round before sewing to the basket. And his tail uses the same short rounds I often use to add curves to amigurumi.

If you’ve done Vincent already, you will find this to be a fast, fun project with a sweet, kissable nose. *Smooch* Love this guy!

This pattern can also be purchased as a Premium Pattern for only $4.00 (printable, ad-free, downloadable .pdf file with extra assembly photos) HERE.  It can also be found on Etsy or Ravelry.

All patterns are written in English, in US terms, using Craft Yarn Council abbreviations.

Head: 7” long from nose to end of horns

Do not break yarn. You will now be working around the last round of this toe and two loose toes.

Bind off. Press flat and sew through both layers of last round. Leave long tail for sewing.

Repeat on other nostril.

Twist horns to your desired angle. Pin a 2 st x 2 st square for each horn, with horns 2 sts apart. Working from pin to pin, sew horns to head as marked.

Position head at an angle on basket with nose overlapping one set of claws.

Mark with pins where the basket touches the head.

Using the tail left on the head, sew the head to the edge of the basket, making sure to sew through two stitches on the head to reinforce the attachment.

Having trouble with the short rounds? Here is a tutorial.

Press last rnd flat and sew through both layers of last rnd to close.

Using long tail, sew flat end of tail to basket opposite the head with the curve of the tail pointing away from the basket.