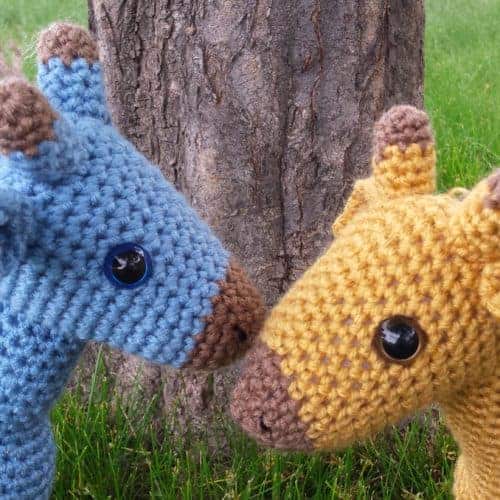 The giraffe is a noble creature, with large expressive eyes and oversized ears. There are many giraffe patterns out there, but not very many for beginners. This giraffe crochet pattern is mean to be one of the first projects for a budding artist.

There are some basic elements, such as straight legs, but there are a few elements of shaping to add to your amigurumi tool belt. 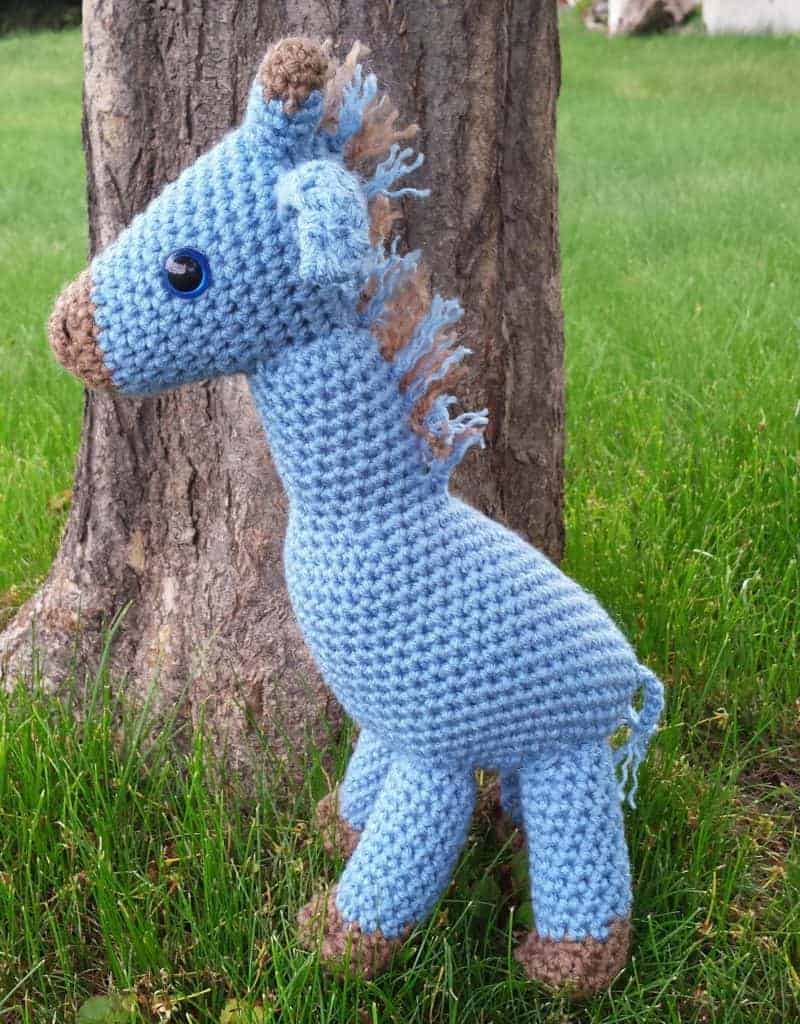 You may sell products made by this pattern, but please link back to hookedbykati.etsy.com or credit Hooked by Kati on the craft fair tag.  Do not copy this pattern for distribution or sale. That’s not nice (and slightly illegal).

Gauge is not important.

For all parts, work in continuous rounds unless specified otherwise.

Use stitch markers to signify the beginning of the round to help you count stitches.

Recommended: Do not weave in ends until all parts are attached to ensure correct placement.

Begin stuffing. Position so that the increases create the center “ridge” of the nose. Attach safety eyes equidistant from the increase line at round 12.

Using needle, thread through the back loop of all 7 stitches. Pull tight and tie off to close. Weave in ends.

Using needle and black scrap yarn, sew two dots for nostrils, making note of the “ridge” of the face for symmetry. You can do this with just a simple stitch or a French knot.

Stuff neck firmly. As you begin increase rows, add stuffing at base of neck to help keep sturdy.

The 3-sc increase is now the top of your giraffe’s back.

Rnd 18-25: Repeat row 17. Stitch count will increase by 2 stitches every round. This will make a “ridge” straight down the body. The increases will form the spine of your giraffe. (48 stitches at end of row 25)

Using needle, thread through the back loop of all 6 stitches. Pull tight and tie off to close. Weave in ends. 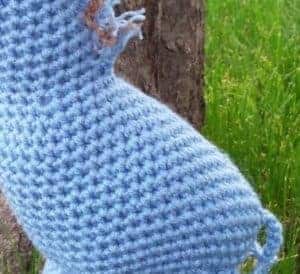 Using G hook and MC, ch 4, leaving a long tail at the beginning.

Bind off. Weave in this end. The ear will fold slightly at the widest point.  Leave the long tail at the beginning for sewing.

This marker signifies the center of the hoof, and will be used when adding the cleft to the foot.

Bind off leaving a long tail for sewing.

Using needle and scrap yarn in AC, thread yarn through the center hole at the bottom of the foot, and out through the hole you marked  as the middle of the hoof.  Repeat.  Pull tightly.  Bind off, remove marker, and weave in ends.

All parts are attached using a whip stitch.

Using G hook, chain 7 with MC. Bind off with a long tail for sewing. Pull both ends tightly. Fray the end of the shorter tail and cut frays to the length you want. Use the longer tail and a needle to sew the tail in place. Weave in ends.

Cut 10 pieces of each color, AC and MC, 6 inches in length.  Attach yarn in a row, alternating colors, down the neck. Start between the horns and end at the body. To attach, fold the yarn in half. Put hook through the stitch, place the yarn loop over the hook and pull it through. Wrap both halves of the loose ends of yarn around the hook and pull them through the loop on the hook. Pull tight and fray yarn. When all pieces are in place, cut the mane so it is even.