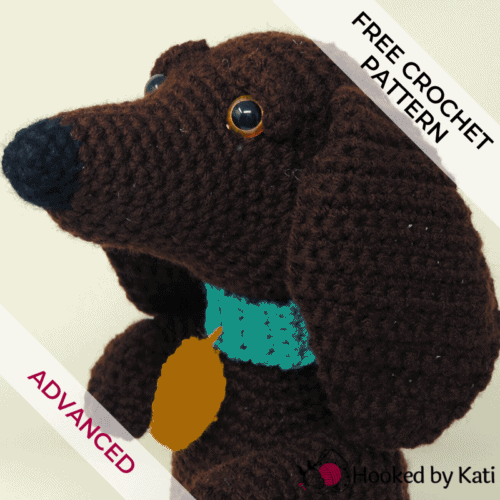 With a large vote on the amigurumi poll, the Dachshund pattern was at the top of my list. Who doesn’t love a wiener dog!? This little fellow will win your hearts and steal your treats.

Have you ever seen a dachshund sit up and beg? It’s hilarious! Their legs are so short they basically just plop right down flat on their bum and their legs stick out in front of them like a person on a sofa. They make themselves into a perfect tripod! And they can sit like that for quite a long time!

It was with this in mind that I made the Schnitzel the Dachshund pattern into a sort of tripod. His bum is flat on the ground with two hind feet that act as his supportive base so he doesn’t fall onto his pointy nose.

The construction for this dachshund pattern is fast and easy. A few well-placed stitch markers will help you when part attachment gets going. His front legs use short rounds for the shaping, so if you have done Vincent the Dragon or Murdock the Kelpie, these will come naturally to you.

This pattern can also be purchased as a Premium Pattern for only $5.00 (printable, ad-free, downloadable .pdf file) here. The Premium Pattern comes with extra assembly photos and a BONUS PATTERN for Schnitzel’s collar and tag.

It can also be found on Etsy or Ravelry.

Insert safety eyes at Rnd 14, 6 sts apart, spaced evenly over flat, unmarked side of nose. Marked stitch of nose is the BOTTOM center of the nose and should be facing down.

Row 25: Skip 4, sl st, leave remaining 3 sts unworked.  This will fold the edge of the last row to the center.

Turn one ear’s fold inside out so the ears mirror each other.

With the folds curled under at the front and the bell-shaped section to the back, attach ears to head in line with safety eyes, 4 rounds behind eyes, at a slight downward angle between Rnds 19 and 24 of the head.

Attach directly over Rnd 15, sewing down both long edges of the eyebrow on either side of the row so it creates a ridge above and slightly overlapping the eye. Repeat over other eye.

Need some help with short rounds? Here is a tutorial!

Align front leg so paw faces down. Align the leg so that Rnd 15 of the leg touches the marked decrease on its respective side of body.

The top edge of the leg should be perpendicular to the body (horizontal). Press against body and pin where the leg and body touch in a circle around the shoulder.

Use yarn tail from leg to attach leg to body. Repeat on other side.

Set body on flat surface, open end up. Align back legs directly under front legs, smaller end sticking out in front of the body, even with the front legs. With both legs and bottom of body on the flat surface, pin where legs and body meet.

Bottom edge of legs should be at Rnd 6 of body. Use tail from back leg to sew around leg where it touches the body. Back legs will help stabilize base of body.

Bind off leaving long tail for sewing. Stuff lightly. Tail should be able to bend easily.

Sew tail to body between back legs on back side, between Rnds 7 and 9 on the body. Bend tail around in either direction and sew tip of tail to either back leg at Rnd 7 of back leg.

Sew head to neck in a square, 6 sts x 6 sts between Rnds 18 and 24 of the head. With body on flat surface, the head should tilt up so that top of snout is horizontal, perpendicular the body.  Tilting the head to the side slightly will add a more dramatic “beg.”

For a tutorial on attaching open-ended amigurumi parts, check out this post.

Add extra stuffing to the neck before completing attachment to stabilize the neck.

Tie loosely around Schnitzel’s neck for a wintery afternoon walk.

Hygge Hedgehog, a fluffy version of a spiny friend.