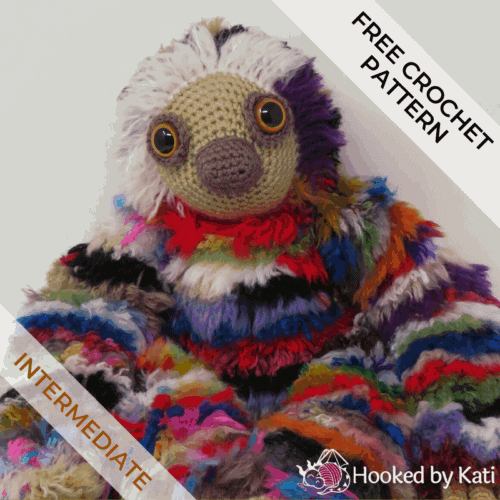 Scrappy the Sloth is a fluffy amigurumi with the most colorful fur you’ve ever seen (or snuggled!). And to add to this cool crochet pattern, it is done completely using scrap yarn! Yep, Scrappy is a stash busting amigurumi.

Oh, how I love scrap busting!

After making so many stuffed animals, my stash starts to become nothing more than a collection of 10-15 yard strands in a myriad of colors, none of which are long enough to do anything other than add detail.

But with the help of my “Frankenskeins,” the balls of scraps I now make using the Magic Knot to tie them all together, I can create funky, colorful critters like Scrappy here, or the Worry Pet!

Scrappy the Sloth is made up almost entirely of scrap yarn. His claws and face are the only parts that call for a “specific color.” However, I give you permission to take liberties with that too, if you wish.

His fur is done completely using the loop stitch.

(Have I mentioned before it’s my favorite stitch for fur?)

The loop stitch is my FAVORITE stitch for fur!

And this particular pattern is really cool because he looks equally awesome with the loops left loopy, cut into strands, or cut and then brushed into a fluff!

This pattern can also be purchased as a Premium Pattern for only $5.00 Premium patterns are printable, ad-free, downloadable .pdf file, with extra photo tutorials to help you with attachments or tricky stitches. You can purchase it HERE.  It can also be found on Etsy or Ravelry.

Gauge is not important for amigurumi. Be sure to use the same hook throughout to ensure proportional size.

Keeping loops on the outside, stuff.

Insert safety eye in center of eye circle. DO NOT attach back washer!

Note: You will be working counter-clockwise, wrong side out for remainder of head.

Rnds 16-23: Repeat Rnds 14 and 15 four more times. Holding head so starting chain of nose is horizontal, place safety eye back with eye circles 4 rounds away from the snout, 7 sts showing between the eye circles. Once eye placement is acceptable, place washers on back of safety eyes, inside the head.

Use three claws for each arm.

Note: You will be working counter-clockwise, wrong side out for remainder of arm.

Use three claws for each leg.

Note: You will be working counter-clockwise, wrong side out for remainder of leg.