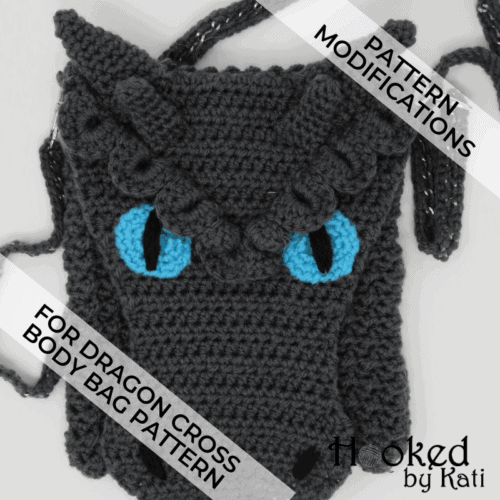 The Dragon Cross Body Bag is a wonderful project. It is by far one of my best selling patterns. Many people have made their own dragon purses (in many cool colors too!) and had great success with it.

As you might have guessed, my nerdy side took hold and after a certain hard-to-watch episode of Game of Thrones, I decided a Frost Dragon purse needed to be made.

So I made some adjustments to the original pattern, and viola! Frost Dragon Cross Body Bag!

These are modifications to the original pattern, not the whole pattern. If you already have your copy of the Dragon Cross Body Bag, you are good to go! Just change the face frills, horns, and nostrils as directed below.

If you already have the Dragon Cross Body Bag pattern, you can download a printable addon of the Frost Dragon Modifications below.

If you DO NOT have your copy of the Dragon Cross Body Bag, get it here for only $4.50.

The newly updated pattern now includes the Frost Dragon Modifications on the end of the pattern. That’s two patterns for the price of one — the original Dragon and the Frost Dragon!

You can purchase the hardware here as well, via Etsy!

The Frost Dragon Mods also add slits for nostrils instead of large, round nostrils. This makes the nose seem more narrow.

Stitch instructions for the Scale-st and Beg-scale are in the Dragon Cross Body Bag “Pattern Stitches” section.

The eyes are made using the same method, just make them in Turqua with Blue slits.

Attach in triangle onto face with edges at corners at first row of hdc. At point of ridges, fingerpress outside edges of side-by-side scales down.