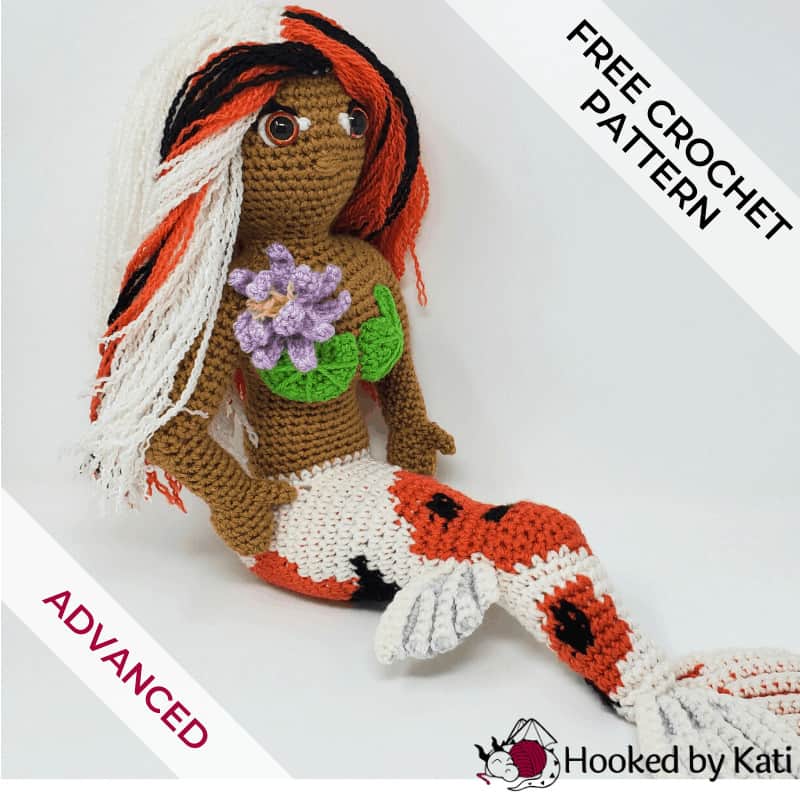 An amigurumi mermaid is such an elegant, beautiful character for your plushy collection, but a mermaid inspired by the koi fish makes for a crochet pattern that is as much fun to create as it is to behold.

Koi fish are a majestic species of ornamental fish. They are a type of colorful carp from India, but they started being bred for their beauty in Niigata, Japan, and so they have a strong presence in Japanese culture and art.

Some Koi can go for thousands of dollars when they are of a unique lineage or particularly beautiful color patterns.

For me, koi represent elegance, uniqueness, and peace. No two koi have the same markings — they are all beautiful in a different way.

I tried to add some of that originality in the pattern for Grace the Koi Mermaid. There are many places within the pattern where you can customize her look to make her one of a kind!

But don’t worry! The exact pattern for her koi-patterned tail is included with all the color changes.

In fact, the Premium Pattern even has a full graph of the color changes, if you prefer to see them visually rather than in writing.

the Koi Mermaid pattern is very straightforward. If you have every made a top-down doll, she won’t give you much trouble.

Her tail and elbows both have short rounds to add some bend in them both.

Her tail bends in the middle so that she can sit on a shelf or she can sit with her tail bent up and have a little more character than your average flat mermaid.

While Grace’s eyes are safety eyes, they have a lot of embroidery detail which is added to the head before they are installed to give it a more human feel. There is a photo tutorial of the eye embroidery (as well as creepy pictures of eyes without eye balls) in the Premium Pattern.

The best thing about the Premium Pattern is the graph for the tail color changes. (There is a picture of it in the listing.) In words, it is very hard to see how the colors block out on the tail, but the graph is a tapestry crochet graph (with some changes to make it work in the round). It makes the process easier to track and easier to follow.

I am so excited that I found a way to offer a color graph for you. I think you will find it very helpful and fun to follow.

The Premium Pattern of Grace the Koi Mermaid amigurumi is a printable, ad-free, professionally formatted, professionally tech edited pattern, with TONS of extra guide photos not included in the free version and a chart for the tapestry colorwork in the tail.

Do not break yarn. Complete eyes, nose, and neck reinforcement before continuing Body.

Marked st is center front of body. Using marked st as reference to center, work eyes and nose as instructed.

With long strand of WHT, using these four pins as a guide to sew a diamond around each center pin. Repeat so that diamonds are 2 strands thick.

This section is done in a photo tutorial in the Premium Pattern.

Thread yarn back to outside corner of eye and sew 3 lines two sts long from the sts under the first black line to create eyelashes. Repeat on other eye.

Insert safety eyes through the marked center points of the diamonds. Attach washers.

Count down 2 rnds from bottom edge of eyes. Sew horizonal line 3 sts long, centered between the eyes. Repeat sewing over this line 6-8 times until the nose looks right to you.

Pick up yarn from Rnd 33 and continue working on body.

Stuff. Make sure to add extra stuffing to breasts to keep them round.

With strand of BRN, thread yarn straight through body at Rnd 33 from the back and out at marked st of same rnd (between breasts). Sew one vertical st, sew another vertical st directly below the first in Rnd 38 (decrease rnd).

Thread yarn back out the back of the body through the starting point. Pull ends until chest puckers in at both front sts. Knot ends together. Hide the knot by threading the tails back through the same hole as the knot and out the bottom of the piece. Cut off excess tails.

Repeat on other arm hole.

Using the starting tails from the sc joins, close the gaps between parts with an ‘X.’

On either side of tail, in line with the edges of the first short round, use pins to mark straight lines from Rnd 27 to Rnd 30.

Position Ventral Fins on either side of the tail with white ridges facing up. Thread a strand of SFT on the needle. Sewing through the ends of only the white rows, using pins as a guide, sew Ventral Fins to side of tail.

At the end of the tail, mark two lines, 4 sts long, one on top of the other, parallel to the short rnds, overlapping by 2 sts in the middle.

Position Tail Fins with white ridges facing up. Thread a strand of SFT on the needle. Sewing through the ends of only the white rows, using pins as a guide, sew Tail Fins to bottom of tail.

Using strand of GRN, sew straight lines from  center out like spokes to every third st of Rnd 5.

Position on breast with crack of lily pad pointing up and at an angle toward the middle. Pin in place. Sew around outside of lily pad to attach.

Repeat on other breast.

With tails on the bottom, form into a spiral with the petals facing out and the starting chain in the center. Stagger the petals so they all show. Pin in place.

Repeat with second strand of YEL.

Cut YEL tails so they become the stamen (pollen stem) of the flower.

Sew to edge of either Lily Pad on the chest.

With SFT, using the fringe threading method (see Pattern Stitches) thread each strand onto the wig cap, in FLO, half way around the last rnd of the cap. Thread across the center line of the cap in a wavy line for the part.

Be sure to only thread strands in the front loops around the edge of the wig cap.

Thread along Rnd 4 with SFT between the part and the edge of the cap to increase hair volume.

Repeat around other edge of cap using COR, threading along the part line next to the SFT line. Thread along Rnd 4 with COR between the part and the edge of the cap to increase hair volume.

Choose a side of the wig cap to be the front, part in the middle. Remove strands of COR in a few places and thread with BLK, creating a few two-strand streaks of black on the COR side of the hair.

With your fingers, start at the “root” of the hair, split each strand of yarn, unraveling and untwisting it into two smaller, wavy strands. Unravel every strand of hair.

Be careful NOT to unravel the sewing tail on the edge of the cap.

Comb hair with fingers and trim to desired length.

Turn upside down so the hair is not in the way. Working through the exposed back loops of the wig cap, use the tail to sew the wig cap to the head.

All finished? Share your art work by posting a picture in the Gallery!! 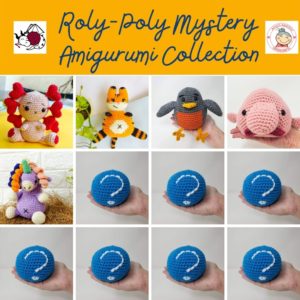