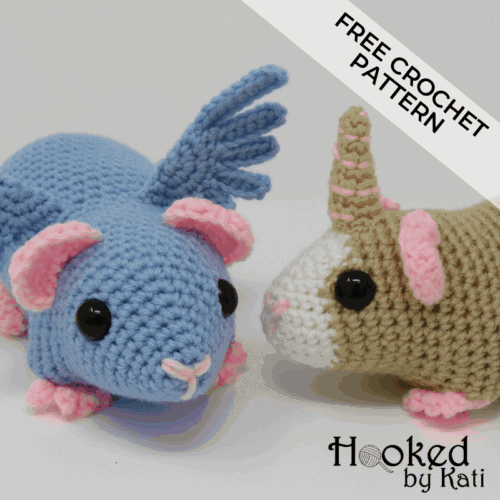 The guineacorn, the magical guinea pig of class myth, was inspired by my three Skinny Pigs (hairless guinea pigs), Podrick, Hamo, and Scooter. They beg for treats and wheek at people as they walk by, and they totally rule the house.

I cave in and give the piggies carrots more than I would like to admit. They get one on the evenings my husband I play Diablo III after my kids go to bed, because I’m such a sucker.

Naturally, they have learned to opening music for the game and the chorus of “WHEEK! WHEEK! WHEEK!” starts before I can pick up a controller.

It was on one of these wheek-filled evenings combined with the unicorn pet in the game that inspired a magical guineacorn.

This pattern can also be purchased as a Premium Pattern for only $2.50 (printable, ad-free, downloadable .pdf file) here.  It can also be found on Etsy or Ravelry.

Pattern written in US terms with Craft Yarn Council abbreviations.

Attach ears to head 4 rounds behind eyes and 4 stitches apart. Attach in straight line along the round, do not curve. Smaller end of ear should be on the inside, RS facing forward. Bend ends over slightly to add “flop.”

Turn feet over so that RS facing down. Curls toes downward. Lay round part of foot on the stump of the front leg, toes pointed straight forward. Using tail and needle, sew around foot flat onto leg stump. Sew under toes so that they remain unattached to the leg stump.

Do not stuff. Bind off, leaving long tail for sewing. Thread needle through back loops of all 6 sts and pull tight to close.

Set body on table, front feet facing down. Set back feet next to body, lined up with Round 35 (last round before decreases). They will be at a slight angle outward. Pin into place. Sew to body using tail. Leave last 2 rounds of foot unattached to body.

Fold in half.  Working through both stitches, work 9 sts in a half circle.

Fold in half.  Working through both stitches, you now have 9 sts around a half circle.

Attach wings to body at Round 19, four stitches apart. Sew all three sc stitches to the body, RS facing forward.

Here is a video tutorial for the wings:

Using needle and a strand of PNK, stitch a spiral around the horn using the back stitch (see Pattern Stitches).

Sew horn to forehead in front of ears, centered between ears.

Using needle and PNK, start at center point. Sew a “V” upward, pointed toward eyes. Repeat so nose is two strands thick. Thread yarn backup through starting point and sew one line straight down about 2 stitch lengths. Bind off and weave in ends.