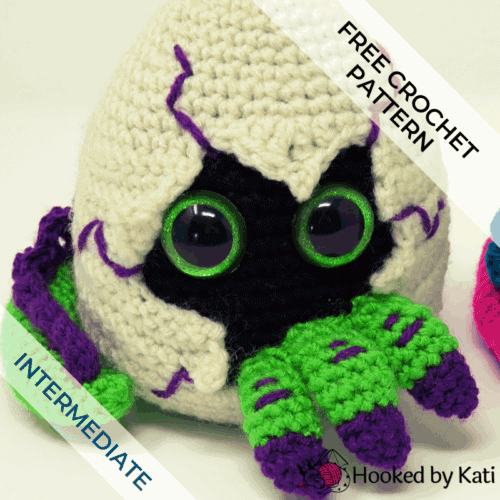 It’s hard to tell what is in this amigurumi egg. Is could be a baby dragon or a baby dinosaur. But for sure, this hatching egg crochet pattern will make you an adorable new friend, even if he is a little shy.

This hatching dragon is not quite ready to face the world, but he his tail just won’t fit in his egg any more, and a claw is all he can stretch out of his safe little egg.

This pattern can also be purchased as a Premium Pattern (printable, ad-free, downloadable .pdf file) here.  It can also be found on Etsy or Ravelry.

Gauge is not important for this pattern.

Bind off and weave in ends. Do not stuff.

Insert safety eyes in Round 14, 2 stitches showing between eyes.

Bind off leaving tail for sewing. Thread yarn through front loops of remaining 6 sts and pull tight to close. Weave in ends.

Sew in a straight line along tail, with shortest ridges at narrowest end of tail.

Sew tail to Inside of Egg in a 4 st x 4 st square between Rounds 22-25, directly on the opposite side from the safety eyes.

Bind off, leaving long tail for sewing. Thread yarn through front loops of remaining 6 sts and pull tight to close. Weave in ends.

Press claws flat. Working through both layers of last round of Claws, sew to Inside of Egg, curling over the bottom edge of the Shell. Weave in ends.

With PUR, thread needle. Sew jagged lines to create the cracks in the Shell. Make sure to work over the edge of the Shell to make each crack go all the way to the edge.

Pull Tail around outside of Shell to the left. With a scrap of GRN, tack down the end of the tail to the body at Round 25. Tail will help egg sit upright. This can be done by threading the yarn through the Tail and the Shell twice, pulling tight, and binding off. Weave in ends.